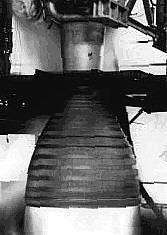 January 10: Static test firing of the first American liquid rocket engine having a thrust over 400,000 pounds (Rocketdyne E-1). It was a backup to the Titan I rocket and was eventually canceled by the Air Force in 1959.

January 10: The Soviet Ministers of the USSR approve the development of an orbital satellite. The Five Year Plan called for Earth-orbiting satellites to gain knowledge of space, (Sputnik), and four unmanned military reconnaissance satellites, (Zenit). Further planned developments called for a manned Earth orbit flight by 1964 and an unmanned lunar mission at an earlier date. After the first Sputnik proved to be a successful propaganda coup, Korolyov was charged to accelerate the manned program, the design of which was combined with the Zenit program to produce the Vostok spacecraft. At that time he was also authorized to develop the rockets and satellites necessary for the first probes of the Moon, Mars, and Venus. 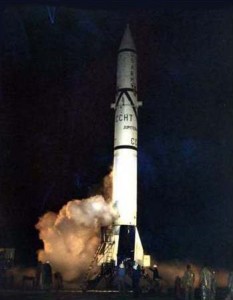 March 14: First launch of the Jupiter A, a modified Redstone missile with guidance hardware from the Jupiter program. 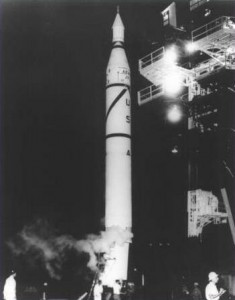 September 20: The first Redstone Jupiter C test vehicle was launched from Cape Canaveral to reach an altitude of 682 miles and a range of 3,300 miles over the South Atlantic. Derived from the single stage Redstone launch vehicle, it was three staged with a weight of 64,000 lbs and a thrust of 83,000 lbs (A-7 engine burning LOX, Hydyne). It made only three launches, all suborbital. The four-staged version was called Juno I. The fourth stage in this case was filled with sand (made inert) by direct orders from the Pentagon who were afraid that Wernher von Braun would attempt to orbit a satellite. 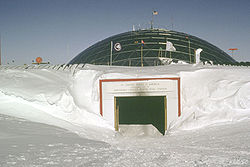 October 31: US Navy Adm. George Dufex lands at the South Pole in a C-47 as a part of a International Geophysical Year project (Project Deep Freeze). He is the first to reach the South Pole since Scott in 1912 and begins establishing a research station there. The South Pole is occupied continuously beginning in 1957.

October: Lockheed was contracted to develop the Discoverer satellite and Agena launch vehicle (second stage) for the Corona Project. 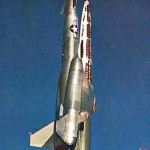 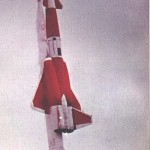 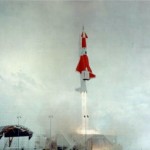 November: The “Wilson Memorandum” blocked the Army of developing any missiles with a range of greater than 200 miles for offensive weapons (but not as launch vehicles). The Navy withdraws from the Jupiter Program as it is interested in Polaris and the offensive weapons part of the project is assigned from Army/Navy to the Air Force. 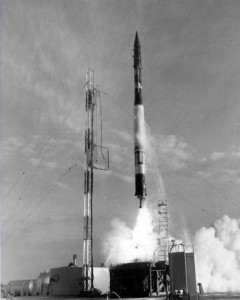 December 8: Viking research rocket No. 13 was launched at Cape Canaveral as the first test of Vanguard satellite vehicle components. The rocket flew at 4,100 miles per hour, climbed 125 miles and landed 180 miles away. (This has been labeled Vanguard TV-0).

December 21: The Atomic Energy Commission began a development program for auxiliary nuclear power electric energy sources for use in space ships at the request of the Air Force. This was given the name Project SNAP.

July 4: First U-2 flight over Russia. During the mission Full Pressure Suits were used by the pilots. Multiple over-flights would occur until 5/1/1960 when Francis Gary Powers plane was shot down. Information on Soviet strategic military capability and rocket/ICBM development was obtained, especially focusing on Baikonur, which was first imaged on 8/5/57.

Ward, J E. True nature of the boiling of body fluids in space.

Strughold, H. Simple classification of the present and future stages of manned flight.