February 8: The Rand Corporation recommended that the ICBM efforts be increased and that the requirements of Atlas be eased to permit an ICBM at an earlier date.

February 10: The von Neumann Strategic Missile Evaluation Committee reported ahighly significant possibility of a major technological breakthrough on the warhead size of thermonuclear weapons and recommended that the ICBM be pursued through the formation of a special management organization. It also noted the advantages of an IRBM.

March 23: The Chief of Staff, USAF approved an Air Force Council recommendation to reorient and accelerate the ICBM program.

March 29: Forty-three members attended the Space Medicine Branch meeting in Washington DC. There was discussion concerning better peer review in the journal and publishing a Space Medicine Branch periodical featuring abstracts of relevant articles. There were complaints from the parent organization that the SMB was becoming too influential and conducting meetings parallel to the main meetings. The presentations given that morning consisted of 8 papers and the attendance was large enough to affect the general meeting attendance adversely. Closer co-ordination in the future was agreed upon. SMB members were still concerned that there were many potential members that could not obtain membership in the Aero Medical Association as an M.D. was required by that parent organization. Col. A. P. Gagge was elected President. Twenty-three new members were elected and total membership was now at 86.

March: The Navy Model H Full Pressure Suit was developed by B. F. Goodrich. It had problems with poor mobility, high leakage rates, and did not have an aneroid controller to maintain precise internal pressurization. These problems were solved with the follow-on Mark series of pressure suits – Mark I (1956) to the Mark IV (1958). 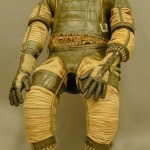 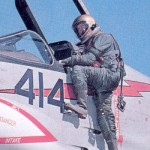 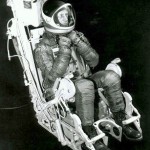 June 10: A Matador missile was launched at Cape Canaveral and hit its target at supersonic speed.

June 21: Responsibility for Atlas was assigned to the Air Research and Development Command, and on July 29, Brig. Gen. B. A. Schriever was put in charge of the project.

June 25: Secretly arranged by Durant, Dr. Wernher von Braun, Frederick C. Durant III, Alexander Satin, David Young, Dr. Fred L. Whipple, Dr. S. Fred Singer, and Commander George W. Hoover met to agree that a Redstone rocket with a Loki second stage could launch a satellite into a 200-mile orbit without any major new development. Five pounds could be put up soon, and a heavier, better-instrumented satellite soon afterward if an official project were set up. Rear Admiral Frederick R. Furth, Chief of Naval Research, approved the idea and authorized an approach to the Army missile directors at Redstone arsenal. This was to become Project Orbiter.
Read the proposal at:

August 3: The Army and Navy representatives met at Redstone Arsenal and agreed upon a joint Army-Navy project which was given the designation Orbiter.

August 4: Dr. Ernst Stuhlinger described his plan for ion propulsion of rockets, at the International Congress on Astronautics meeting in Innsbruck.

August 7: The Air Force revealed that the School of Aviation Medicine had received the first specifically built space cabin simulator. 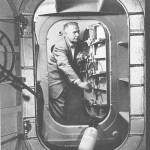 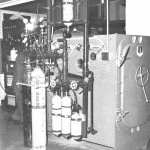 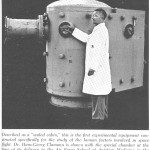 August: The Western Development Division (now Ballistic Missile Division) under the Air Research and Development Command was activated to manage Atlas research, development, and testing, with the highest Air Force priority given to the project.

September 3: The Air Force announced that it was planning a missile range of 5,000
miles long from Cape Canaveral to Ascension Island.

October 4: The Special Committee of the International Geophysical Year concluded a meeting in Rome, Italy, and recommended the launching of an Earth satellite.

October 18-19: At the suggestion of Dr. Theodore von Karman, the Ad Hoc Committee of the Scientific Advisory Board reviewed the case for the nuclear rocket, quiet since a 1947 study by North American Aviation and a 1953 report of Oak Ridge. They recommended that the work be a continuing study. 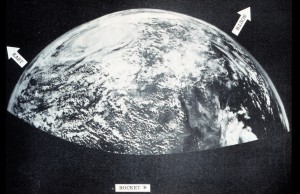 October: A Naval Research Laboratory Aerobee took the first photograph of a complete hurricane (near Del Rio, Texas) from an altitude of 100 miles over White Sands.

November 20: Design of the R-7 ICBM approved by the Soviet Commission of Experts. The design work had been started by the OKB-1 led by Sergei Korolev during 1953. The engines (clustered RD-107 X 4 and a core RD-108) were designed by Valentin Glushko. They used four chambers to each engine to avoid problems with high frequency vibration.

November 27: The American Rocket Society’s Committee for Spaceflight (chaired by the Viking Project manager, Milton Rosen) submitted a report to the National Science Foundation advocating placing a satellite into Earth orbit based upon Viking technology. This was the start of Project Vanguard.

von Beckh, H J. Experiments with animals and human subjects under sub- and zero-gravity conditions during the dive and parabolic flight.

Murray WD. A Gondola for Physiological Research in the Atmosphere.