January 16: The decision was made to resume studies of the MX-774, redesignated as
Atlas, and it was reactivated as a project at Convair.

April 18: Beginning on this date, several Aerobee rocket launches with USAF Aeromedical Laboratory biomedical experiments were launched at White Sands, New Mexico. The flight profile was 45 secs of 3-4 G followed by 150 secs of 0 G.
In summary: 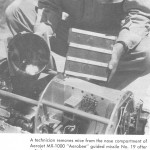 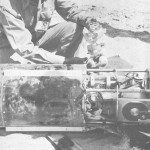 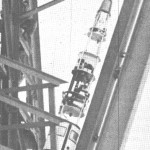 May 15: The Council of the Aero Medical Association formally approved the creation of the Space Medicine Branch. This was the first constituent organization to be formed.

May 17: The first public meeting was held of the Space Medicine Branch at the Aero Medical Association annual meeting in Denver. The presentation was: “Space as a Functional Concept” by Dr. H. Strughold and Dr. Fritz Haber. Dr. Herman J. Schaefer also gave a short talk on radiation effects in space. The talk is summarized in

October 4: Mikhail Tikhonravov in the U.S.S.R. stated that Soviet science makes space flight feasible including the creation of an artificial Earth satellite.

November 6-9: The School of Aviation Medicine and the privately financed Lovelace Foundation for Medical Research at Albuquerque, NM, sponsored a symposium entitled “Physics and Medicine of the Upper Atmosphere” in San Antonio. The material presented by the 44 speakers covered the nature of space, the mechanics of spaceflight, and the medical difficulties of sending a man beyond the breathable atmosphere and was later published as a book. It was at this 1951 meeting that Dr. Strughold expounded on his most notable contribution—the concept of “aeropause,” a region of “space-equivalent conditions” or “atmospheric space equivalence.” The term “aerospace” originated from this concept and came into use following this meeting. Strughold pointed out that while many astronomers, astrophysicists, and meteorologists set the boundary between the atmosphere and space at 100 to 600 mi from Earth, the biological conditions of space begin much lower, at about 50,000 ft. Strughold contended that the distinction between space and atmosphere was artificial and misleading, at least as far as human biology was concerned. For this reason, he argued that manned spaceflight was a natural extension of aeronautical flight, and space medicine was a logical extension of aviation medicine. Biomedical investigations into the human factors of spaceflight, he concluded, must be an extension of the knowledge already gained from aviation medicine. The proceedings were later published as a book.
Ref – White CS, Benson O. University of New Mexico Press, 1952.